Greenway of the Ducal Residences of Parma

The Greenway of the Ducal Residences of Maria Luigia is the cycle route that connects the Ducal Palace of Colorno, The Pilotta Palace, the Ducal Park of Parma and the Casino dei Boschi of Sala Baganza, the three most representetive places and monumental complexes of the territory and of its historical, natural and cultural landscape, aligned and oriented on the North-South axis suggested by the streams of Parma and Baganza, confluent that cross the city passing through its exact geometric center at the Roman Bridge (Ponte di Mezzo). This route join these three places and makes perceptible the three hundred years of history of the Ducky of Parma and its artistic production between the 16th and the 19th centuries. This made Parma a court, a city and a capital of European rank (urban architecture and spatiality, , garden and landscape art, sculpture, painting, typographic art, decoration, furniture, glories and delights, theater and musica) from the Farnese to the Bourbons and to the Habsburg Family.

The Greenway of the Ducal Residences is the most representative section of the inter-regional route of national value called Ti-Bre Dolce (Tirreno-Brennero) (Verona-Mantova-Sabbioneta-Casalmaggiore-Colorno-Parma-Sala Baganza-Val Baganza-Berceto-Passo della Cisa- Pontremoli-Sarzana – Mar Ligure Tirreno) under construction. It starts from PArma on the cycle path that runs along the right bank of the Parma stream and Via Europa from the Nations Bridge. It continues Via Moletolo, S. siro and S. Andrea (option: a bridge to pass on the left bank of the Parma stream that leads to Torrile and the LIPU Oasis and then pass the stream again on the Torrile Bridge), following low traffic roads until Colorno and along the Parma embankment (optio: before the overpass of the Colorno ring road, the road on the left leads to the La Selva farmhoise and to the bridge that allows you to reach Torrile and the LIPU Oasis). After the overpass of the Colorno ring road, you arrive in Vedole, turn right and then after 10m left, following the road on the embankent that passes the Oratory of the SS Annunziata with a polychrome roof. Continue to Colorno where you are welcomed by the Ducal Palace and its garden (overall 19km). After the visit to the Ducal Palace, exit from Colorno by turning left at the roundabout and then right after 100m following the Naviglio canal, once used to transport the pink marbles of the Cathedral and the Baptistery of Parma. Along the way in Gainago you will find a beautiful parish church. Further on, turn onto Via Viazza di Paradigna, in view of the Abbey of Valserena, a monumental Cistercian church which now houses the CSAC (Center for Studies and Communication Archives www.csacparma.it). Continue along Via Viazza di Paradigna and enter the provincial road by turning right; cross it carefully and take Via Borghetto and turn left into Via Argine Baganzolino, which is the road taken in the outward journey. You arrive in PArma at the Nations Bridge. The Lungo Parma is held up to Verdi’s Bridge. On the left there is the Pilotta Palace and following the Reserve Palace which houses the Glauco Lombardi Museum (http://www.museolombardi.it/sitolombardi/default.asp) which collects historical and artistic testimonies on Marie Louise of Habsburg and the Ducky of Parma. The route crosses the bridge and enters the Ducal Park. Return to Lungo Parma, which you follow up until Caprazucca Bridge. Turn right crossing the Parma stream and after turn left along the cycle path of Via Maria Luigia. You will arrive in Marsala Square where you go anticlockwise the cycle path beside the roundabout that leads to Via Varese, which is the left bank of the Baganza stream. Continue on the cycle path in Via Baganza and when it ends, at the Navetta Bridge, enter Via Baganza (signs for BI16). Then proceed on Strada Farnese (the ancient road for the ducal hubnts). At a bend in the road, at Villa Ortensia, turn left onto the dirt road that leads to the Baganza embankment. Go under the bridge of Felino and taking a right you will exit onto the provincial road and you will arrive in Sala Baganza (15 km). After the fortress, continue towards the Parco dei Boschi di Carrega (http://www.parchidelducato.it/) and the Casino dei Boschi, a villa-farm, a hidden jewel of neoclassical architecture for several decades and an English-style historic garden evocative beauty. Returne along the same road as the outward or exit the Boschi di Carrega via the Coventino Road, which joins the SS62 in Collecchio. From here, where you can stop at the Pieve di San Prospero, exit onto Strada Nazionale and right onto Strada Giardinetto, then left onto Strada Cavi, cross the Provincial Road to Sala Baganza and enter Strada delle  Valli, which ends on the FArnese Road (BI16) which leads to Parma. 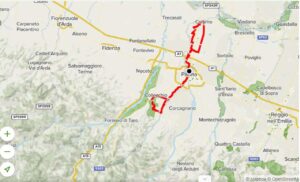